Life’s a Beach but Molinari can profit

Hot favourite Dustin Johnson’s withdrawal from the Pebble Beach Pro-Am – though not a pro-am this year because of Covid – won’t have thrilled the sponsors but comes as a relief for the rest of the field, and for punters it opens up the contest dramatically.

The absence of the world number one and double Pebble champion – no reason was given – is a massive blow to the Californian tournament, which is unusually weak this year with nobody else ranked in the world’s top ten in the field of 156.

As short as 7-2 in some lists after a dazzling tee-to-green performance in Saudi Arabia, his fifth win in 13 starts since golf resumed, the Masters champion has been a Pebble Beach fixture, playing with his celebrity partner and future father-in-law, Canadian ice hockey legend Wayne Gretzky.

But with amateurs as well as spectators banned to reduce the risk of the virus doing its evil work, the big social event once known as the Crosby Clambake loses all of its glamour and becomes a run-of-the-mill 72-holer over just two courses, famed Pebble Beach and Spyglass Hill. The usual third course, Monterey Peninsula, is not needed.

World number 11 Patrick Cantlay takes over as favourite with the in-form Dubai winner Paul Casey next best and holding an obviously much-improved chance of bagging his second victory in three weeks.

The worry with British hope Casey is whether at 43 he has enough petrol left in the tank to play his best four weeks on the spin in three different time zones and after so much international travel.

The amateur embargo came too late for a change of title, not that they would have done that anyway, and as their absence is for one year only I am rebranding this edition the Pebble Beach Pro-Tem!

Unlike last week’s Phoenix Open where a limited but still-boisterous crowd saw the half-forgotten Brooks Koepka regain that winning feeling on the Scottsdale course where he opened his PGA Tour account six years ago, Pebble will be strangely silent.

With no Bill Murray clowning around to “amuse” the fans, and celebrities we’ve never heard of trying to upstage the pros, the pace of play and atmosphere will be entirely different.

So it’s just a normal tournament – the only one we’ve got on Sky this week as there’s nothing going on in Europe – and the value of past form is possibly open to question.

There’s no doubt who would be the most popular winner. That has to be Jordan Spieth.

The former world No. 1’s heartwarming return to form after three and a half winless years since his 2017 victory in the Open Championship at Royal Birkdale. Who could have forecast then the alarming slump Spieth’s game went into?

Of course the 27-year-old Texan is still looking for that elusive W after failing to convert his share of the 54-hole lead at Scottsdale into victory but that fourth spot represents his highest finish since he took third place at the 2019 PGA Championship.

Going out in the final match on Sunday had become a novel experience for the personable Spieth who bears his regular disappointments with a smile and has never doubted his ability to turn things around.

He had no great expectations of clinching the deal in Scottsdale where historically he has rarely prospered but saw the week as a great warm-up for Pebble Beach where his record stands up to close inspection.

He won there by four shots in 2017, the first of three successes that stellar year, topped off by adding the Open to previous Major triumphs at the Masters and US Open. It is significant too that last year’s ninth at Pebble was his best finish of a pretty glum 2020.

He is only too well aware his game is still falling a fair way short of his golden years when he looked like winning everything bar the Boat Race and while a win at Pebble is not as far-fetched as a week ago, another decent showing will do his prospects at Augusta, where he went 2-1-2 on his first three attempts, a power of good.

The list of contenders to dethrone defending champion Nick Taylor is a long one and even at 50 Phil Mickelson cannot be discounted. As a five-time champion in three different decades, he virtually owns the place and It is only two years since Lefty last triumphed there, only one since he made a bold third-place defence.

However, recent form has been unimpressive and there’s a worry he’s over-golfed as this is his fourth tournament on the spin and includes a tiring trip to Saudi Arabia. At least he made the cut at Torrey and Saudi but much more will be needed.

There are risks attached to backing the globe-trotting Casey, who has finished eighth in California, won in Dubai and shot four decent rounds for 12th in Saudi these past three weeks.

Can he produce a fourth straight good showing now back closer to his Arizona home? Admittedly, playing good golf and earning big bucks is far less tiring than doing the opposite but he might well need a break.

It’s a chance I shall be taking as he has taken a shine to this tournament in recent years after not including it on earlier schedules. After finishing eighth in 2018, only Mickelson was able to beat him the following year and he is in a good place right now.

Cantlay is a class act but doesn’t win as often as he should and at 7-1 I can afford to miss him. Daniel Berger, fourth to Taylor last year, rates a better bet. He went on to beat Collin Morikawa in a Fort Worth play-off and started this campaign with a brace of top-tens in Hawaii before surprisingly missing the Phoenix cut.

At the prices, I’d rather give a spin to 2018 Open champion Francesco Molinari, now a California resident, who took a long break to get his family settled in LA but made a smart restart with top-tens in his adopted State at La Quinta and Torrey Pines. The little Italian is fresh and hungry for success.

Pebble and Spyglass, both par 72s of under 7000 yards, should suit his tidy game, particular the tighter Spyglass which starts with five linksy holes with ocean views before turning into a tree-lined test of accuracy.

There have been quite a few shock winners, Canada’s Taylor being one last year. They won’t be at big prices after DJ’s pull-out but two well worth considering are Kevin Streelman and Max Homa.

Streelman plays above himself at Pebble (2-7-6 the last three years) and Homa, tenth in 2019 and a fast starter last year with a 9-6-14-5 run in late January and February, has caught the eye more than once. This is the time of year to catch him.

Jason Day has eye-catching course form (4-4-2-5-11-5 last six years) and while missing his last two cuts is off-putting, those keen on the Aussie will point to Koepka doing exactly the same thing before landing a 40-1 victory in Arizona on Sunday.

South Koreans Kyoung Hoon Lee, whose close second to Koepka was a career best, and classy but inconsistent AmEx winner Si Woo Kim are also of interest, as is star Korn Ferry Tour graduate Will Zalatoris.

This tournament holds some great memories for me because it was at Pebble that I tipped a rare 100-1 winner with Matt Gogel in 2002.

Two years earlier, he had led by seven with seven to play before catching sight of Tiger Woods in his rear mirror and folding like a pack of cards. The following year he led after 36 holes. So it was third time lucky.

Fortunately there was no Tiger chasing him in 2002 when volatile leader Pat Perez gifted it to my man Matt, taking an eight on the spectacular 18th to Gogel’s birdie four by driving out of bounds then slapping his fourth shot into the Pacific.

Bad boy Perez took several lumps out of the hallowed Pebble Beach fairway by way of revenge but has calmed down a little since and won three times in an up-and-down career. More than capable when in the mood, he wouldn’t be the worst 125-1 poke.

It is not going to be particularly warm or windy and there’s a fair bit of rain predicted. Come rain or shine, Pebble Beach is always wonderful, a tad expensive at $575 if you want to brag you’ve played it but enjoy its beauty and hopefully back the winner! 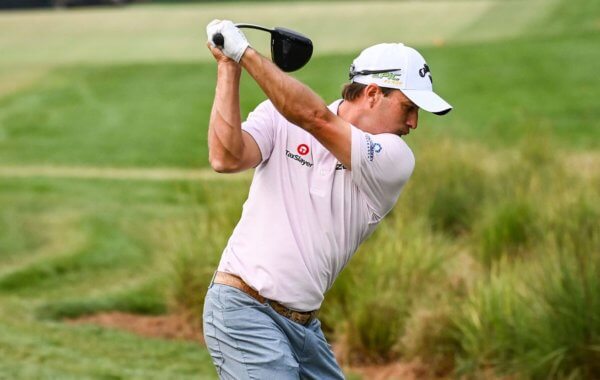 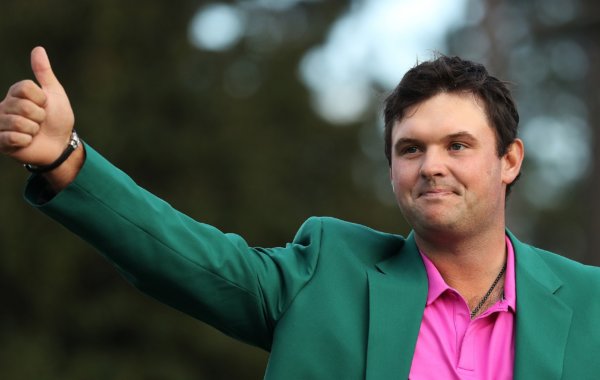