How to pick the Gold Cup winner

Forget natural instinct, paddock picks or pure luck. The only way to consistently back winners is with cold, hard data. Trends are clues. If you find enough, you’ll solve the puzzle. This puzzle is called the Cheltenham Gold Cup and it’s been going since 1819. Just don’t ask us for a receipt…

AGE
No horse has won the race over the age of 10 since 1969. Native River, despite overcoming both the mud and Might Bite in 2018, is now 11 years old. He would be a popular winner given his legendary trainer Colin Tizzard is retiring. History is against him. On that note, you can rule out Aso too.

MARKET
The more the bookmakers know about the horses, the more likely the winner will be found at the top of the market. Given these are the classiest horses in training, there aren’t many secrets. It is therefore no surprise that the winner has been in the top seven in the betting every year since the turn of the century. That would rule out Black Op, Lostintranslation, Kemboy and Frodon. Yes, that means no 10-minute post-race interview from jockey Bryony Frost.

EXPERIENCE
Only twice in the history of the Gold Cup has a novice won the race. Captain Christy was the first in 1974 and then there was a gap of more than forty years before Coneygree stormed home under Nico de Boinville for Mark Bradstock in 2015. Royale Pagaille may have been Cornelius Lysaght’s antepost tip to us, but we anticipate he won’t be collecting on that verbal betslip.

RECENT FORM
When it comes to the Gold Cup, form is crucial, class is permanent. Every winner in the last 20 years has already scored at Grade 1 level and registered at least one win in their previous four runs. That includes the shock 2014 winner Lord Windermere at 20/1. In fact, the last horse to win the Gold Cup and not have a win in their previous four races was Norton’s Coin, the sensational 100/1 winner in 1990. Based on that, Nicky Henderson’s Santini has to be ruled out.

GOLD CUP FORM
Only four horses have ever won the Gold Cup three times and they are all national treasures. Golden Miller won it five times, while Cottage Rake, Arkle and Best Mate completed the hat-trick. Al Boum Photo comes into this as favourite, so we certainly aren’t taking his challenge lightly. That said, it would be an injustice to the sport were he to bow out with more wins than the great Kauto Star.

TRAINER
Jessie Harrington won the Gold Cup with her first ever runner in the race, Sizing John in 2017. A very rare achievement made all the more intriguing given the horse was moved from Henry de Bromhead’s stable the previous September. He saddles two today and has only ever had one in the race before, Monalee. Given how unlikely it is that a trainer would win with one of their first ever runners, we can tentatively draw a line through De Bromhead’s Minella Indo and A Plus Tard. Hardly an exact science, but…

THE CHAMP?
Champ, of course! The very same horse who broke Minella Indo’s heart with a late burst up the hill in the RSA last year. Would there ever be a more suitably named winner?

For all the latest Racing Betting Odds on upcoming races or early prices on the 2022 Cheltenham Gold Cup visit our page for Horse Racing Betting. 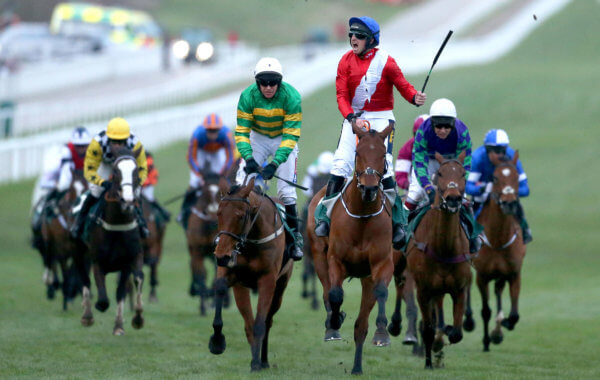