A crazy 24 hours in Cheltenham racing history was steeped in pure sentiment.

Something extraordinary happened between 3:30pm on Wednesday 13 March and 3:35pm on Thursday 14 March. Sport has a habit of excelling itself, and the past six months have set stratospheric standards in suspense and impact. Sweep aside the astonishing Champions League comebacks in May or Ruby Walsh’s farewell wave at Punchestown, Tiger’s triumph at the Masters or Tyson Fury defying heavyweight precedent to get up from the canvas not once, but twice. These remarkable 24 hours at Cheltenham in March had everything.

With plots and sub-plots, they captured all the beautiful elements of why we love racing. In a stretch of eight races, seven favourites won, joined by one well-backed second favourite. By the time it was over, the bookmakers, us included, were praying for divine intervention. This all came after a torrid few weeks in which equine flu had threatened the very existence of this year’s Festival.

It is no exaggeration to say this was one of the finest days in Cheltenham punting history. Millions were won and, well, millions were lost. Our competitors, who shall not be named, were so badly winded that another merger or two is not out of the question. For our part, we survived and here we are to tell the story.

To examine why this was such a special occasion, you must scratch beneath the surface. This wonderland has a far deeper rabbit hole than you could imagine. Among the wild euphoria stood three protagonists who have won racing fans’ hearts: Bryony Frost, Patricia Pugh and Andrew Gemmell.

It is likely you may have only heard of Frost, the swashbuckling and hearty young jockey who has stamped her mark on jump racing. She has gradually floated into racing’s consciousness, highlighting what hard work can achieve while exposing some home truths about gender inequality in the sport. Here stands a woman who rejects the injustices she faces through her passion and enthusiasm. She chews up the narrative and jumps all her obstacles with grit and charisma. Her story is inspirational, and yet she is so plainly unaware of her profound impact, that it is thus even more enhanced.

There have been plenty of female jockeys before her, not least Lizzie Kelly and Rachael Blackmore, who both won at the Festival this year. To dismiss them would be unfair and yet, for some reason, Frost has galvanised racing. On the Thursday of Cheltenham, astride the wings of Frodon, she took a flying leap forward for equality by becoming the first woman to win a Grade One. It was exemplary by every metric: this big win won’t be her last.

Horse ownership, unlike jockeyship, does not suffer from the same inequalities. There are no social or physical barriers to buying a horse, except through currency, of course. Patricia Pugh first decided to buy a horse in the early 2000s, but sadly it went the way it does on most occasions. After that brief foray, it was a decade before she delved back into the market, picking Altior among a team of hopeful horses. 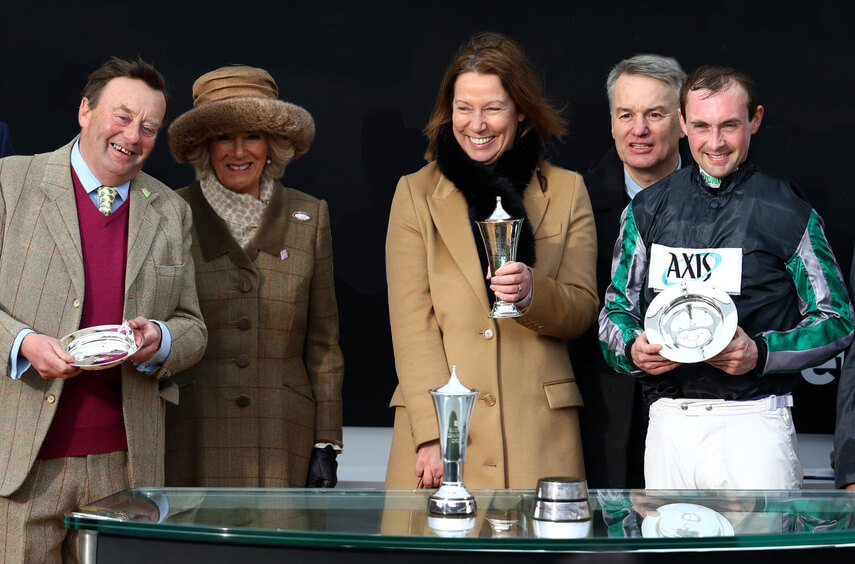 When Pugh bought Altior, little did she know of the victories she would carry for dreamers and small owners. Although this is a horse that has just won a record-equalling 18th race on the trot, his wins have been hard-fought, his challengers a plenty, and with it all, Patricia’s passion and investment was rewarded. He is the ultimate champion. Flawed jumping in recent wins has heightened the suspense for each run: this is a beatable yet unbeaten horse over fences. The fact his challengers think they have a chance is what makes every victory ever more satisfying.

Altior has united everyone in racing, and Patricia Pugh is a symbol of what is possible for fans. Her luck is racing’s luck. While Pugh and Frost’s stories lit up the Festival and stole the headlines, there was a third iconic moment that put everything else in the shade. Perspective, of course, shapes one’s view of events, both literally and metaphorically. So just close your eyes for one second. Try to visualise that moment Frodon was headed on the final fence, battle-weary and exhausted. Frost gave him one last shake of the reins and he burst back into life, overtaking Aso before revellers threw their hats and bet slips into the air. It was a sight to behold.

Picture the colours of those cheering in the crowd. The tint in the grass, the intensity of the moment. The wide smile on Frost’s face as her eyes lit up, patting Frodon enthusiastically. His head bobbing back and forth, veins bulging, nostrils flared in the face of mass adulation. Now imagine not even being able to imagine that. In fact, imagine you don’t even know what a horse looks like, or even a human. Green is the colour of grass and yet you’ve never seen it. Your horse is chestnut brown, which you know is different from grey, but you’re not sure how. He won by three lengths. You know that is a long way because you know about racing. You’ve known your whole life. You don’t see it, but you do feel it. 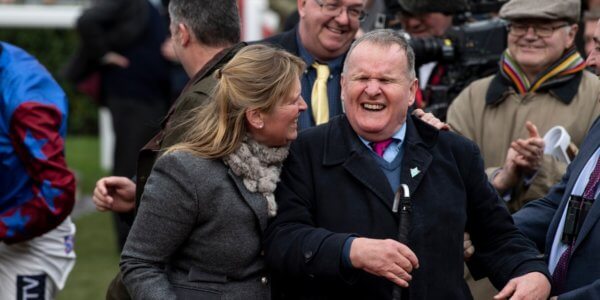 For Andrew Gemmell, this is closer to the truth than any of our experiences of racing. He would dismiss his adversity because he knows no different. Blind from birth, it has been but a mere hurdle for him in his racing love story. On the Thursday of Cheltenham, at roughly 3:35pm, Paisley Park came from a seemingly impossible position in the field to absolutely romp home in the Stayers’ Hurdle. Gemmell’s richly lived life has been intrinsically sewn into the fabric of sport. Whereas he once used to enjoy Test cricket on the radio as a schoolboy, he now lives and breathes the sounds and whooshes of horses galloping past. His story supersedes anything we have seen at the Festival for years, if not decades.

Interspersed between these three stories coming to fruition were other glorious moments. Tiger Roll, the diminutive hero of Aintree, won at his fourth Festival with aplomb. Envoi Allen, in the Cheveley Park colours that are rarely seen over jumps, continued his undefeated run. The JP silks were hoisted high twice on the Thursday, with Defi Du Seuil and Sire Du Berlais.

This was such a rare set of results that as bookmakers we could only smile and take it; to form any other view would have tarnished the reason we are in this game. The soul of racing relies on moments like these. We are blessed to have witnessed such a momentous chapter in Festival history and no profits in the world could substitute what Patricia Pugh, Bryony Frost and Andrew Gemmell have given to racing.