At the Cheltenham Festival that nearly wasn’t, trainer Paul Webber felt the stars were finally aligning in his long quest for a Festival winner. 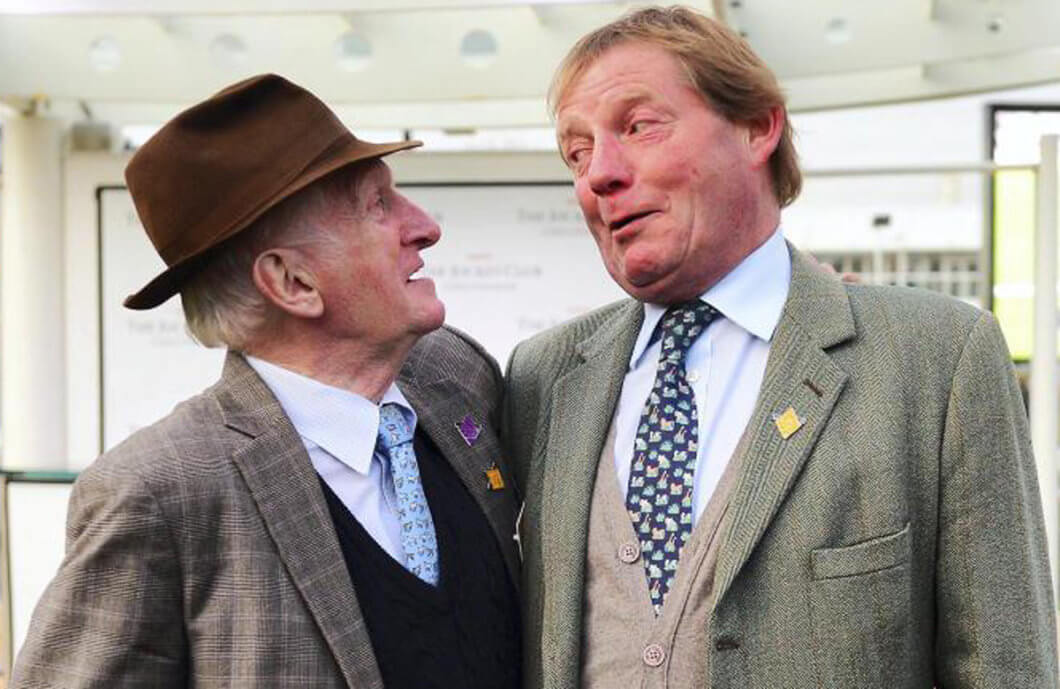 Thirteen has never been considered unlucky in the Webber family. I was born on 13 August, my father’s 33rd birthday – not that he was conscious of my arrival until the following day, as he had his two naughty brothers staying to help (or hinder) him finish the harvest. They celebrated ‘harvest home’ in proper fashion, which was far more important than the arrival of a third child.

Saddling our horses with a ‘13’ number-cloth has never brought on superstitious worries for the safety of our horse and rider. We were very excited with our runners at this year’s Cheltenham Festival and their preparation had gone well, so the fact they were competing on Friday 13th was not a concern. Plenty of other disasters might await, but the date would not be blamed.

Somehow I was the designated driver for this year’s pilgrimage. Despite the excitement of two ‘proper, not social’ runners, there was still the fear of leaving empty-handed through the North Gate yet again. It’s a quiet drive home, puzzling over what we can do better to get that Festival winner. Usually by the time we’re through Stow-on-the-Wold we’ve cheered up a bit and have recognised one horse back at home with a legitimate chance for the following March.

Trainers have a usual routine when we get to the races, and it’s even the same at ‘Paradise Park’ on Gold Cup Day. We met up with House Island’s owners, the Economic Security Partnership, a remarkable band of National Hunt brothers. These friends have had a horse with us for 23 years.

House Island endured the big disadvantage of having to make most of his own running in the Albert Bartlett and was still in front into the straight, before speedier opponents left him in eighth place. The standard trainer’s rallying speech then followed: great run, thrilled with the horse, so much to look forward to, he’s crying out for fences and what a chasing prospect he is, very like Time For Rupert, but probably better. Excited talk of the future around a table with bottles of Pinot Noir, a mere giveaway at £50(!) from Jockey Club Catering.

My wife’s backhand resulted in an alcoholic aroma surrounding me for the rest of the day.

Just before we left the party, my wife Ku made some gesture that resembled her finest crosscourt backhand and sent the only full glass of white wine on the table all over the trainer’s best tweed suit, which only gets out of the cupboard for Cheltenham. My wife’s backhand resulted in an alcoholic aroma surrounding me for the rest of the day.

Ku and I left that marquee and walked almost straight into Carol Pipe and then Martin. We chattered away for a little while and said just how much we would love our runner Indefatigable to win his race, the Martin Pipe Conditional Jockeys’ Handicap Hurdle, the last race of the Festival. As we walked on, we felt that this chance meeting seemed very opportune and decided it must have been a great omen.

The presence of Indefatigable at our stable is a shining example of friendship bringing good fortune. She was bred and owned by John O’Connor of Ballylinch Stud. John is big man, and I presume his heart and Indefatigable’s are about the same size. I met him at a Tattersalls sale about 30 years ago: I sensed a presence an instant before the tap on my shoulder. He introduced himself and stated that we were often bidding on the same horses and my actions were costing him money. He politely suggested that it would be more economical if we became friends.

John has had a horse or two here, but in mid-January 2018 he rang to tell me that he thought he had a special filly who had just finished third in a mares bumper at Punchestown. He adored this filly and wanted to retain a minority interest in her, if I could find him a partner.

This entire tale is about the stars aligning in perfect celestial order.

The most crucial part of this alignment was Philip Rocher entering our orbit. Philip works in London, but a few years ago he also bought a lovely place four miles away from us. His daughter Kate runs a top-class eventing yard and soon started using our gallops, and Philip enjoyed coming to watch her. After a while he took a small share in a horse called Tindaro, who gave everybody plenty of fun without being a star. The next step was buying an unbroken three-year-old who showed promise in two bumpers but didn’t improve over hurdles so joined Kate’s eventing string.

However, sometime before Christmas 2018, Philip made a remark that most people would not notice but a trainer with bat-like ears would never miss: “I would some time like to race a filly.” There can have only been a maximum of five weeks between Philip’s remark and John’s phone call. There was six inches of snow and ice on the road as I went to broker this idea to Philip, Lesley and Kate. As in every deal, trust is the key: I trusted John, and Philip and his family trusted me, so when Kate and her vet approved Indefatigable, our new constellation was formed. Indefatigable’s stable name became Mary, after John’s inspirational wife. Mary herself runs a 60-bed care home – a tough task even in quieter times.

How many owners have a runner at Cheltenham but then at the last minute are unable to attend? This was no normal year, though. With Covid-19 infection numbers rising daily and increasing worry and doom circulating around Europe, there were serious doubts whether Cheltenham could, should or would happen at all. How very helpful to the meeting going ahead was the little-known fact that our health secretary, Matt Hancock, had shown fine skills when riding the winner of a charity race at Newmarket?

A member of Philip’s family who was living with them was scheduled to undergo a critical bone marrow operation. The whole Rocher family debated whether they dare risk anybody attending what could be a prime location for the spread of the virus. Philip put family before sport and called me during the morning to say that they felt they must stay at home.

Indefatigable marched into the paddock with her typically determined stride, ears flicking straight back if any horse got within her perceived zone. Her fierce attitude always gives me confidence before her races, as you know she’ll battle through any inconvenience. To my mind, her odds of 33-1 were an insult to both her and me. Just two days earlier, Dame de Compagnie, who had beaten her at Cheltenham in December when in receipt of 6lb, had won the Coral Cup. Form does not get more solid than that.

We seemed to collect a very supportive entourage in the paddock, including our local MP Victoria Prentis and her team, House Island’s owners, Rupert and Vanessa Fairfax (who provide our horses with fabulous saddlery at home) and anybody else we could press-gang to join us. The flying of our aeroplane was in the hands of pilot Rex Dingle, in his very first sortie for us. He and ‘Mary’ had met three days previously, when they schooled over eight hurdles in perfect harmony at home. Our plan was for Rex to jump off middle to outer, to get a position with a bit of daylight in the forward half of the pack. We felt she had hit the front too soon at Cheltenham in December, and with such a long run to the last, Rex must wait for as long as he dared and then wait two seconds more! As taught by Jack Ramsden, “Don’t worry if you don’t quite get there, but don’t get beat because you hit the front too soon.” It is always better to start with plan A and then resort to B and C if you have to.

Plan A looked to being going really well until there was a false start! Then the trouble really started as, instead of listening to Rex’s urgings to line up, ‘Mary’ was totally absorbed in protecting her airspace by snarling and trying to bite her opponents. At the standing start she was flat-footed, not concentrating and slow into her stride, jumping the first hurdle in plum last. Flight plans A to T had blown out of the cockpit, but our ace pilot was ice-cool, sat quietly and let things unfold in front of him as the pace was plenty quick. Still last going up the hill with less than a mile to go, they passed one horse and started to thread their way through the field as they galloped downhill. Their bravest moment was at the second last, where neither her pilot nor ‘Mary’ could possibly have seen the flight, but she jumped like a gazelle between two horses.

Still ten lengths off the leaders as she turned into the uphill straight, ‘Mary’ was flying. She was very quick over the last, dodged a faller and set her sights on Pileon. They crossed the line together and nobody knew for sure, and we didn’t dare to hope. The freeze-frame then gave an inkling of hope, which I banished and refused to accept. 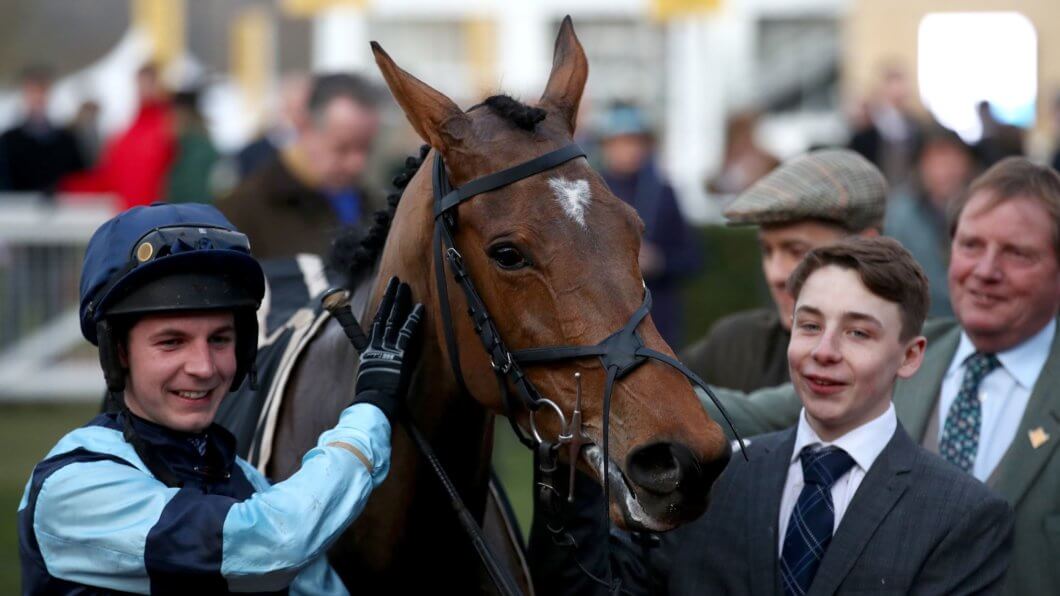 Indefatigable had got up to win by a short head, and as hoped we got to meet Martin Pipe again – the closest finish in the last race of the Festival that might not have taken place. We left through the North Gate and I drove home, sober as the judge who called the result of our race but intoxicated by the bubbles in the champagne and the wafts of wine emanating from my tweed. It was a much noisier drive home this year.

Racing ceased four days later. All of us who were so lucky to attend or watch Cheltenham in March owe huge gratitude to the hundreds who managed to make the meeting happen, and I hope you understand that I am more grateful than most. My father trained two Festival winners, the last of which was Elfast in 1994, the year before he died. I feel he may have played a part in aligning the various stars in this story in the correct order, which enabled this fairy tale to become reality. To be a dual Royal Ascot winner and finally a Cheltenham Festival winning trainer feels good, and I send huge gratitude to everybody who made it happen. I assume lockdown is excused in Heaven, so I’m now very worried that the celestial pub, “The Open Arms”, may soon run out of Dad’s favoured brandy and ginger ale.

Paul Webber is busy preparing for Cheltenham 2021 at his Oxfordshire yard.