Lewis Deyong recalls the biggest gamble of his life, rewarded with the greatest return.

Back in the early Seventies, pro tennis had just begun and­­­ was not remotely close to what it has become. Of course the four slams predominated, but otherwise the top 20-25 players trotted around the USA playing in dinky arenas for peanuts by today’s standards. This was despite a roster packed with famous names that even young readers may recognise: Laver, Rosewall, Smith, Emerson, Ashe, Newcombe, Stolle, Okker… the list was endless.

In those days I was living at The Palm Bay Club (the Bay in question being Biscayne Bay, around which Miami has grown up). During the winter season the club was packed. Race trackers from New York, a sprinkling of the Miami Dolphins, the world champion power boat racers, golf major winner Ray Floyd and flocks of exquisite girls to match. I’m sure you get the picture – in the parlance of the times it was “rocking”. It was also an Eden for gamblers. Golf, poker, football betting, backgammon – you name it, we played it.

By happenstance there was even a healthy side to life, in the shape of four tennis courts. I have played tennis from the age of eight and in the bright Florida sunshine had a whole winter to sharpen up my serve, which was just as well because tennis suddenly became the focus of our gambling lives. The pro tour was coming to town, the players were all staying at the club and would be playing a two-day pro-am with members (entry fee: $1,000 to charity). The most interesting feature to us, however, was a Calcutta to follow the opening dinner. For those unfamiliar, in a Calcutta every team is “auctioned”, anyone can bid, and the total pool is later redivided between the purchasers of the winner (66%) and runner-up (20%), with the balance going to charity.

Our little group of 20-25 amateurs now cast a different look at each other. Most were regular players and in the new circumstances a bunch of egos went bananas – and, I may add, into the bay went any concept of camaraderie. 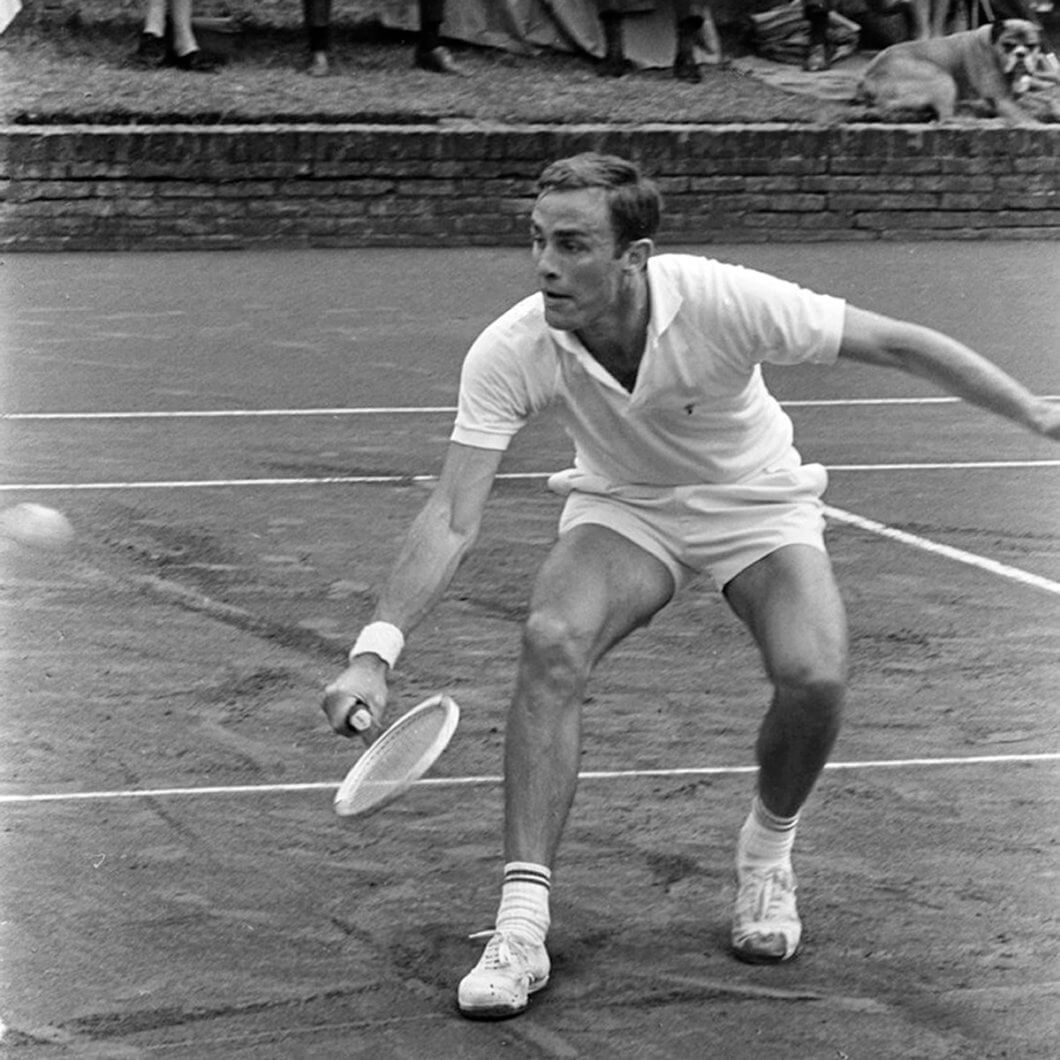 Lewis can count John Newcombe among his victims

The club owner, Connie Dinkler, set the tone for the Calcutta. Her first bid was $5,000 for the team of John Newcombe and Alan King, a famous New York TV comedian. This team had no chance as King had played tennis for maybe two years, and was 50lb overweight. What Connie had done was throw in a prize for the rest to shoot for.

The auction continued as follows: first the amateur was sold alone, and then he picked his partner out of the hat. I was last on the list, and one by one the top pro names disappeared. My great pal Walter Cooke (a celebrated backgammon pro) was paired with doubles specialist Fred Stolle. Walt could not resist a sideways smirk in my direction. The only remaining pro I could see in the room was El Shafei, an Egyptian whose idea of “going to the net” was restricted to the handshake there after match point. Face and ego demanded I buy myself ($2,500); the total for the 25 teams was over $60,000. To put it into perspective, in those days a nice two-bedroom ocean flat at the Palm Bay cost about $40,000.

With a mournful sigh I picked out the last scrap of paper in the hat, and, as I was unrolling it I began to rehearse my few words of backgammon Arabic. Then lightning struck: written there was the name Tony Roche. Roche, Roche, Roche! The best of the best – winner of the Wimbledon doubles and possessor of the greatest asset any pro could wield in a pro-am: a deadly spinning lefty serve upon which no amateur could lay a glove. Guess who was smirking now?

The next day we met. “I hear you’re one of the local hotshots.” His Aussie twang acerbic: “Well, this is what you have to do: get your first serve in against the amateur, and get the amateur’s serve past the pro at the net – I’ll do the rest.” He put me on the left side, remarking: “I’ve won five Wimbledon doubles playing on the left, you’re my first partner to put me in the deuce.” Even so, a little later he did not feel too bad. Our opening match was against Ken Rosewall and film producer Bobby Evans (you might just remember one of his films: The Godfather). However, in this instance I sent Bobby my own parcel with a fish inside, and to the bottom of the bay he went, 1-6 1-6.

Furthermore, we had bet a few thousand on the match. Roche was delighted, as he was on a free roll for 25% of our winnings! Next to fall were Cliff Drysdale and his partner, the playwright Neil Simon (The Odd Couple), and then came Newcombe and King on Centre Court, in front of 500 spectators. For a lifetime tennis junkie I was living the dream. What price Wimbledon now!

The Newcombe/King match was a breeze, Tony intercepted virtually every ball Alan King hit, turning the match into a singles. Just one point was a touch antsy. I was at the net and somehow a mid-court lob appeared on their side. Newk was prancing around waiting for it to drop, when he suddenly looked up at me and smiled.

My sinking gut told me what was coming next, and sure enough something that looked about the size of an aspirin came flying my way at a most appalling angle.

I had dropped my racket head to a level of self-preservation and by some miracle the aspirin pinged off for the luckiest volley winner in tennis history, and we broke the Newcombe serve. At the end, sure enough, waiting in the final were Stolle and Cooke. No longer smirking, Walt proposed a hedge of $5,000. I now went against a lifetime of experience and, just to annoy him, refused. The match was on, Stolle to serve.

In these matches the pros’ service games are virtually automatic – if they don’t beat you with heat on the first serve, the second arrives with paralysing spin in a totally unexpected direction. To lose a pro’s serve is disaster, capital D.

Looking back now at my maybe 60 years of gambling, betting, competing and whatever, I knew this was The Moment of Moments: somehow we got to advantage against the Aussie serve. I was receiving in the advantage court, and as I am a lefty I guessed Fred would serve down the middle to my backhand. If in all the years there was a time for a pure all-or-nothing gamble, that was it. As Stolle’s eyes lifted to follow the toss, I shifted weight to the right, prepared a backhand grip and turned my shoulders to that side. Even underarm to the forehand would have won Fred the point, but – hallelujah! – his head was up and the serve came right along the centre line. I was as ready as I was ever going to be and followed the script every tennis addict learns from birth: eyes down, step in, hit on the rise and follow through. Off blew the ball right between them: a clean winner. The greatest shot of my life, on the most important point I ever played (before or since).

We crossed sides and I heard Walt mumbling: “They broke Stolle’s serve… his serve… they b-b-b-broke it.” His slight habitual stutter now sounded like teeth chattering in the heat. Walt was gone in game one, the rest a formality.

Connie Dinkler and Alan King are long gone, as is Walt (a tragic victim of cancer aged 38). Bob Evans is in a wheelchair, and the Palm Bay of the Seventies now exists only in the memory of a few survivors. Fred Stolle stayed on to live in Florida and we became long-term friends. I do see Tony Roche on his occasional coaching trips to London (Lendl, Hewitt and Rafter have featured among his wards). He subsequently beat me in two other pro-am finals (one partnering UK bloodstock agent Andy Smith), but so what – I had already known my moment in time. It will never come again, but in that tiny split second I had won my own Wimbledon.

Lewis Deyong has been defying the odds all of his life. He famously backed Boris Becker @ 66/1 to win Wimbledon in 1985.