Want to know how to prevail in a penalty shootout? Just ask a German, of course. Dietmar Hamann recalls how he helped Liverpool win the 2005 Champions League.

We didn’t do any penalty practice before the Champions League final. In July, 10 months earlier, we went to the USA in pre-season, where after training manager Rafa Benitez would get everyone to take three penalties. I don’t know if he made notes, but that was the only time I took a penalty all season.

He had a pretty good idea who was going to take one, and after extra time he went around asking the people he had chosen if they wanted to. He came to me and said: “You’re taking one.” I nodded, and two minutes later he came back and said: “You’re taking the first one!” At the time I didn’t know who would be taking the other four because I think it is very important to concentrate on what you have to do. Luis Garcia went up to him as he wanted to take one, but Rafa said no.

I don’t know if it’s any different going first or going fourth. You’re in the zone and concentrating on what you’re doing and I didn’t have a problem taking the first penalty; to be honest I just enjoyed the responsibility. My task was made slightly easier because Serginho missed, so even if I did it would still be level, but at the same time I knew I could put us ahead for the first time on the night, which psychologically was a big thing.

I only found out a couple of days later that I had a stress fracture in my foot. I had felt a little crack in my foot five minutes before the end of extra time when I came down from a header. But the adrenalin was flowing and we had made all our substitutions, so at the time it didn’t even enter my head to think that this warranted treatment or even going off, so it never crossed my mind.

You’ve got to pick your spot. You can miss your penalty, but if you do, you have to miss it for the right reasons. The most important thing is to commit; you can compare it to a putt in golf, where if you leave it short it can’t go in.

Dida, the AC Milan keeper, is a big man, and as I walked up I thought that it’s easier to generate power going across your body, so I was always going to go to my left. I did think that if he moved early I might change my mind, so I stuttered my run up to see. I tried to hit it a certain height, because if you hit it above 3 and a half feet you’ve got a 90 per cent better chance of scoring – all penalties that are saved are down low or at knee height. I didn’t want to hit it too hard, but I was focused on getting height on the ball without taking the chance of knocking it over the bar.

The closer you get to the target, the bigger it should be. Unfortunately that’s not how it looks when you stand over the penalty, as there are a lot of places to miss. Dida is an imposing figure at 6ft 5, so when he stands upright there isn’t an awful lot of space underneath the crossbar and you think: “Bloody hell, where can I put this?” Put it this way: when I took one in pre-season in America I reckon the goal was quite a bit bigger! 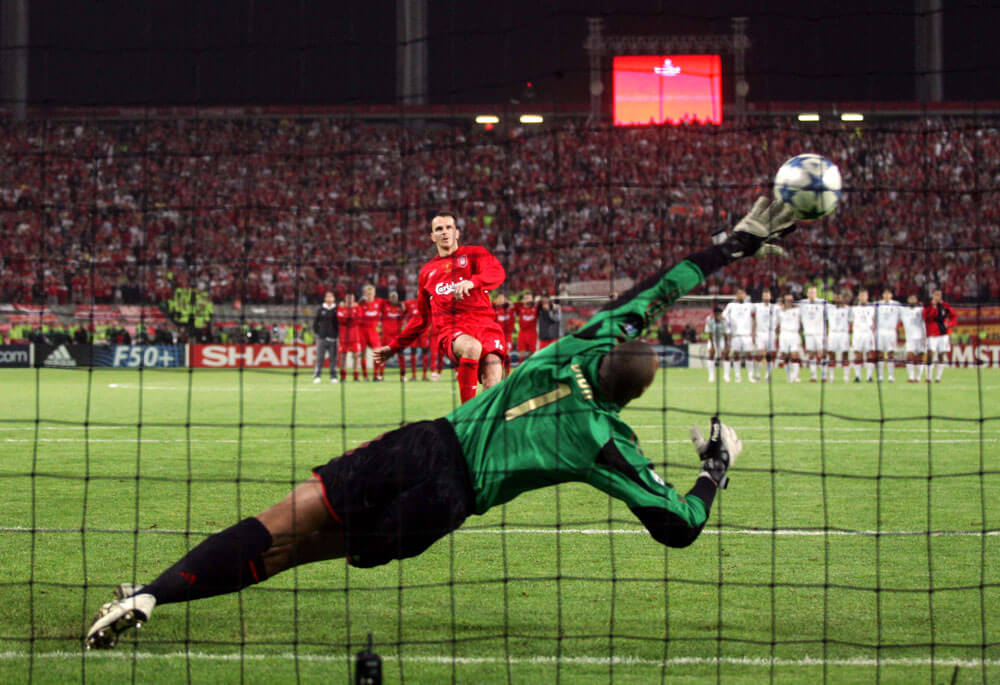 Dida moved to his right for every single penalty, also in regulation play when Alonso missed his, which I had kind of forgotten about. So in my run-up I delayed briefly to see if he was doing anything, but he was just static, so I thought: “If that’s the case I’ll go across you.”

The overriding emotion when the ball hit the back of the net was relief. You’ve done your job and now over to the boys. You’re only a fifth of the way there, but you’re 1-0 up. In penalties I always feel going first is an advantage and obviously we didn’t do that, so to make the most of them missing was quite important. We then went 2-0 up and thought: “That’s us now,” but then three penalties later all of a sudden it’s 2-2. You can never be too sure or take anything for granted and the bigger the occasion the harder it is to score.

You should expect a footballer to hit the target from 12 yards. Just don’t let the occasion get to you. The taker should always be strong favourite to score a penalty. There is a psychological thing too, but there’s no reason why England can’t win a penalty shoot-out. If England win one I wouldn’t put it past them to win three or four. I don’t think there’s a big secret to it; some goalkeepers are better than others at it and you need a slice of luck. Just try to stay as calm as possible and commit.