The development of American football closely parallels that of the country in which it was born – both were bastardised, rebellious, rule-breaking things that jumped up out of a wilderness. Take the forward pass, which in a remarkable coincidence came along in 1906-07, precisely the same time that mechanised flights were taking off. The airborne game, which so separates the Yank version of football from its rugby forebear, was the singular innovation of the most American of all teams, the Carlisle Indians.

The Carlisle Indians were real Indians, who played football in America at the turn of the century as an exercise in resistance and the refusal to be moved out of the way. And if early American football was about anything, it was about moving people out of the way. Harvard University coach Cameron Forbes, a grandson of Ralph Waldo Emerson, called football “the ultimate expression of Anglo-Saxon superiority”.

As the 19th century drew to a close, the American Civil War was over and the frontier was conquered. Young American men, fearful of becoming over-civilised in parlours now that the primeval forest was subdued, became obsessed with this brute territorial game in which the scions of the most prominent families at Harvard, Princeton and Yale could test their physiques and fitness for power by mowing each other down in wedges.

But in 1907 a small boarding institution named the Carlisle Indian Industrial School intruded on the narrative. Carlisle played a game of higher stakes: for them, football was a chance to earn respect in white society, and to burst racial stereotypes. In their hands, football was not an exercise of raw power, but an exploration in how to subvert it. With a series of trick plays, they reshaped the game from one of pure force into an experiment in “the human capacity to withstand violence and create something beautiful despite it, or even from it”, in the words of Michael Oriard, a historian at Oregon State University who wrote Reading Football, a cultural history of the game.

Carlisle had been founded in 1879 by a former cavalry officer, Richard Henry Pratt, to forcibly acculturate American Indians. Children and grandchildren of combatants in the Plains Wars were shipped east to the boarding school in Pennsylvania, where they were systematically anglicised under Pratt’s motto, “Kill the Indian, Save the Man”. Their braids were cut off, they were baptised with Christian names, forbidden to speak their native languages, and taught conventional trades, and farming. “I believe in immersing Indians in our civilisation and holding them there until they are thoroughly soaked,” Pratt said.

They were also taught anglicised sports. Initially, these were purely calisthenics to keep the students out of the infirmary, where many of them ended up due to unhealthy diet and conditions at the school. But in the mid-1890s a group of male cadets persuaded Pratt to allow them to play football, and after some preliminaries they began to take on the Ivy League teams. They saw these games as opportunities to redress old wrongs and exact a measure of revenge on the world that had destroyed theirs. The Carlisle players believed that conflicts between whites and Indians “had never been waged on equal terms”, their coach Glenn “Pop” Warner recalled.

Initially, the Carlisle Indians were viewed as a curiosity on the level of a Wild West show. But by the turn of the century they had become a competitive fixture in collegiate football, thanks to the coaching of Warner, a nascent young genius and a social outsider who found his niche at Carlisle. The Indians were underweight and undermanned against the hulking, rugby-style power plays of the Ivy League. But instead of trying to plough through them, the Indians went around them. By necessity they became masters of misdirection. Warner understood this and designed a series of hide-the-ball plays designed to emphasise speed and deception over power.

The meeting of minds between Warner and the Indians reached a peak in 1907, when Carlisle became the first team to establish the option as well as the passing game – and essentially invented the modern game you see today. The innovations came just in time to rescue early American football from boredom and abolition. The game was so brutal that it caused 18 deaths and 149 serious injuries on the field in 1905, provoking a movement to exile it from college campuses.

President Theodore Roosevelt, whose own son had been injured in a Harvard game, called officials from the Ivy schools together to discuss reform. The result was a series of rule changes calculated to make the game safer and more “open” by broadening the field of play, including legalisation of the forward pass.

It seemed the whole world was going airborne. The Wright brothers experimented with how to keep their heavy, gas-driven winged machine aloft, while in France, a Paris-born Englishman named Henri Farman performed the first banked turn in a plane and flew in a full circle.

Most coaches considered the pass an unsound experiment – players tended to handle the ball awkwardly, lobbing it underhanded, or end over end. The Indians threw differently, however. They had been toying with forward passes for years purely in fun, and by 1907 one of them, a Cheyenne named Pete Hauser, was adept at grasping the ball by the laces and throwing spirals. As Warner watched his team in practice, he realised he had a new weapon, and it fired his creative imagination. He designed a new formation called the single wing, and created options out of it in which a quarterback rolled out sideways to buy time while receivers streaked downfield.

“How they did take to it,” he remembered. “Light on their feet as professional dancers, and every one amazingly skilful with his hands…” In particular, Hauser was a triple threat who could run, kick, or throw, and “hit his ends on the dead run with uncanny accuracy”, Warner recalled.

At first Carlisle’s new offense went relatively unnoticed. But on 26 October 1907 it burst into the national consciousness when Carlisle played the fourth-ranked University of Pennsylvania. On just the second play of the game, Hauser hit an end named William Gardner with a 40-yard bullet across the middle of the field. 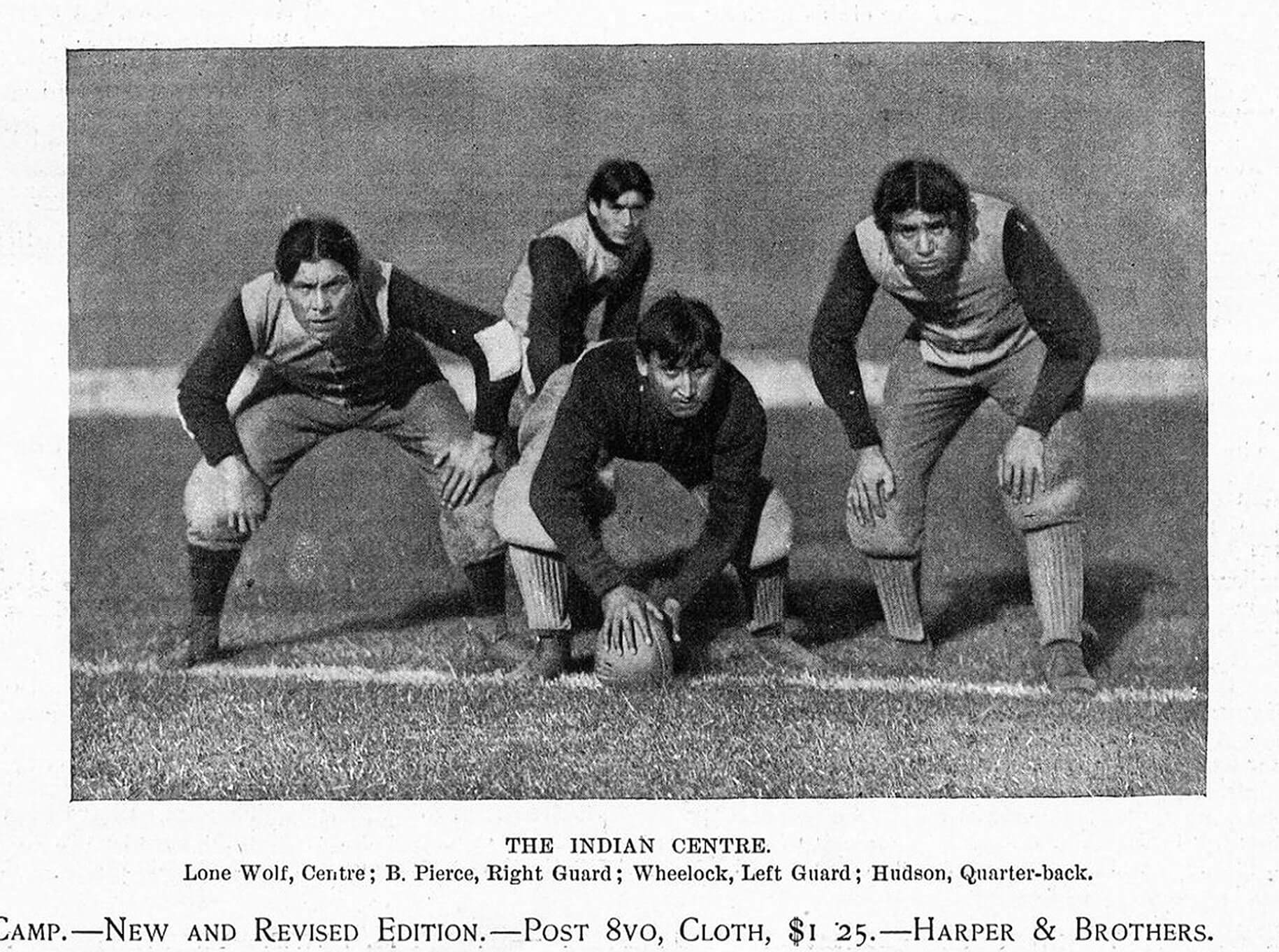 Up until that moment, if teams threw at all, they were short, wobbling passes. This was different – a stunning new vision that spatially altered the field. It was “no such puny pass as Penn makes, but a lordly throw, a hurl that went farther than many a kick”, the Philadelphia North American reported. Imagine how it must have struck Victorian audiences, who had only seen clumsy power football. Now the ball traced a neat, tight, spiralling arc through the air.

Suddenly the game seemed to levitate – players lifted out of the mud to mid-air, where receivers made balletic leaps to grasp the ball with their fingertips. Carlisle beat Penn 26-6, with the Indians completing eight of 16 passes. They amassed 402 yards of offense – an impressive figure in any era but a gargantuan one for the time. By way of comparison, Penn gained just 76 yards.

From then on, teams didn’t know where to look. Carlisle would use the pass “on any down and in any emergency – and it was seldom that they did not make something with it”, according to one newspaper. Their tactics so discomfited the traditional powers that sometimes things turned nasty. At one point during an unbeaten streak, Hauser limped off the field and reported that he had been kneed. “What did you do?” Warner asked. “Didn’t you say anything to him?” “Sure I did,” Hauser said. “I said, ‘Who’s the savage now?’”

The peak of the season came against their arch-nemesis, Harvard. Carlisle had played Harvard ten previous times, often closely, but had never won. They were alternately admiring and envious of the Crimson, who were their ideals of excellence. When anything was done to perfection, the Indians said it was done “Harvard-style”. But this time, the game would be played pure Carlisle-style: it wasn’t seven minutes old when Carlisle completed a 45-yard pass.

They scored three times, each set up with a marvellous piece of misdirection – runners would fake around end and then pull up short and throw back across the field, until Harvard’s defenders were turning in circles. The final score was 23-15, and Harvard was so frustrated that angry fans stormed the field and a Crimson player was ejected for punching Carlisle’s Albert Exendine in the jaw from behind.

From Boston to New York, Carlisle’s victory over Harvard was front-page news. “Crimson Hopelessly Baffled by Indian Tactics,” one headline read. A team of Indians had beaten Harvard to shatter racial stereotypes. But that was just part of the story. The Indians were not only hailed as the equals of the college boys; they were dubbed “Masters of the New Football”.
They had invented a whole new brand of game, a game of the future, and the traditional powers were clinging to their
old tactics at perils of extinction.

Sally Jenkins is a sports columnist for The Washington Post and the author of The Real All Americans, a book on the Carlisle Indians.