I played football until I was 12. When I was 13 it was winter and we needed something to do inside, so we started a darts round-robin. There were three of us. One of the guys was really bad, but the other two of us had a real rivalry which got me going. Back then my dad organised a youth tournament; I came third and won a little trophy. I was the happiest kid in the world.

I wanted 20 more trophies so I practised every day, and soon after that I began to realise I had a special talent.

By the time I was 15, I was European youth champion and I won tournaments all over the continent. When I was little my parents could only afford to take us on camping holidays in Holland because there were six of us. But by the time I was 17 I was playing darts in Vegas and New York! I met Daphne when she was only 14, I was nearly 18 – they had a music evening and she was with her parents. I asked if I could watch a movie with her. It helps to have a good woman behind you as well as professional management.

Life has changed since then because darts has got really big. The sport has been associated with booze for decades, but there is a new breed of darts players. The old times of drinking are gone – it’s a professional sport now, it’s not about the pub and drinking. I look after my body seriously and take great care of it. After a match, I often have an hour’s physio to relax my throwing arm and shoulders. We play for very high stakes, so it’s only natural it becomes more professional.

We have 150 days of darts each year, so I can be away from home for 250 nights. I like to get up late on tournament days and always have a cappuccino. I arrive at the venue three to four hours before a match to make sure I’m ready. Winning is very important to me. Of course you have to train hard to remain the best in the world. But equally important is the balance between work and home life. I don’t train every day and don’t have a dartboard in my house. 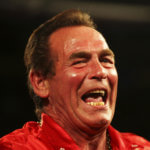 I didn’t start playing until I was 30 years old. I went sea fishing with some friends in Kinsale, Ireland, and it was so rough we couldn’t get out. So this fella Malcolm Ellis said to me: “Let’s have a game of darts,” and I thought to myself: “That’s a bit of a funny game, that.” I was more the physical sort.

Malcolm was a good player in our area and immediately persuaded me to take it up. He said I should have a crack at the Super League in Hainault the following Wednesday. He picked me up and took me to a pub call the Maypole, and a fella with a clipboard asked how long I’d been playing. “Since Friday,” I said. “Well, we want the good players,” he said. “It’s the Super League.”

What I liked about it was everyone was buying me a drink – they’d say: “You can play well, what you are drinking?” And I thought: “This is nice. Better than digging tunnels on the London Underground or laying granite floors; no one offered me a drink then.”

I didn’t like to practise, to be honest with you – it was boring. These modern guys practice four, five, six hours at the board each day, they ain’t got much life. I know what you put in, you get out, but if you’ve got a natural talent, coming to it the way I did, practice wasn’t right, so I used to play matches. I’d go up the pub or up the social club and play someone; they didn’t have to be a good player. When you practise you throw three darts and walk back 7ft 9in and then you throw again. But when you play, you don’t actually do that. You’ve got about 16 seconds in between throwing. If you’re playing someone you’ve got the right timing: wait, throw, wait, throw. So I just used to play people. Some people need to practise properly, but not me.

In my day you didn’t have the tournaments you have today. So I played in a lot of money matches, where you played a good player for money. You might have to travel on the plane, and so you had the pressure of playing for money and your expenses. That was our apprenticeship. Today they’re spoilt, have everything done for them. The promoter really looks after you – all your drinks, food.

I quite enjoy it when I go, but it’s a completely different game, a longer game. We played best of five or best of three legs, that’s all – you couldn’t make a mistake. The North American Open was best of three, 301, double in – now that’s a dangerous game. You had to be on your game straight away or you’d be out. Today you can lose a couple of sets and get back into it.

I think there were more characters in the Seventies and early Eighties. Drinking might have had a part to play in that. I always say you can drink and play darts at the same time, but you can’t drink and then play darts. If you sit down and get a few beers down you, and then you try and throw a dart you won’t be very good. But if you’re playing and you’re drinking then your body doesn’t feel the power of the drink so much.

I have seen a guy drink too much not long ago – a big guy, and he drank too much before he played. He was a big guy, he could drink, but he started too early, and when he got on stage that night and the heat hit him, he went to pieces.

But that was just him. For me, beer and darts go together – you can’t take that away, y’know?