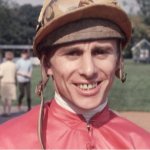 the training – it’s all changed in my lifetime. Nowadays you’ve got gyms, they’ve got these equicisers. We had a bail of straw! I wasn’t naturally fit. I did 6 stone 5 in 1959 at Aintree, and that wasn’t a natural weight for me – I was on oranges for a week.

Of course, in my day we had four months off, and then it was always a battle at the beginning of the season to get fit again. The last 10 years of riding I would go to my local place down here (near Cirencester) and I always had a private trainer to push me. As you get older in years you have to be pushed. He timed me at things and he’d try to make me go quicker every day. I’d cycle for 15 minutes just to warm up, stretches, rowing machine, weights – I did everything.

It was a gruelling hour. I felt great; I felt much stronger and the wind was a lot better. One year – it was the first time I’d used a private trainer – I started 3-4 weeks before racing started and I ended up going to the races 8 stone 2. Very fit – but very muscly. The muscle I’d built up at the top of my legs put weight on me and I couldn’t do my weight, so there was a bit of panic. But I stopped doing the gym and, by riding every day, gradually those muscles went.

The race meeting (to mark the start of the season) always in your mind was Doncaster. You jumped off the first horse and your knees gave way, oh dear! Then there was a race over two miles. I always dreaded getting a ride in that – there were a lot of tired jockeys in that race. If you got involved in the finish and overdid it – I remember one year I just lay down in the weighing room. It’s like breathing in fire, every breath felt like fire in your chest. 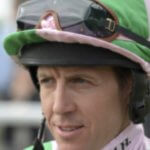 I remember a few years back Kieren Fallon said to me: “Being a champion jockey is all in the mind.” I remember thinking this was absolute nonsense, but he was right!

Since becoming champion jockey you really do realise how much of a mental test it is. If I’m riding out in the mornings I’ll be up at 5:30am and my last ride could be at 9pm, so I won’t get home until midnight – and this monotonous cycle will continue, so family time is really precious. I realised in order to counter this I had to get myself a driver who would take me to the different racecourses I was riding at. It’s the best thing I ever did, as it meant in those down moments I could chat to my wife and kids and take my mind off things. My family have always been so supportive.

No day is exactly the same and my routine is constantly evolving. During the first half of the year I would be riding out twice a week and keeping fit in the gym (I have a gym at home, which helps). I do a lot of interval training – sprinting for 20/30 seconds and then resting for 40 seconds – and I’ll try and do this for 30 minutes. It’s a real killer. It’s all about doing those hard yards early so you can sustain the physical pressures throughout the long season. One of the main reasons I won the Jockeys Championship this year was down to my fitness – I genuinely never felt tired,­ even when I was going from Haydock to Chelmsford in a day.

A few of us jockeys went up to see Dr George Wilson at Liverpool John Moores University a couple of years back – he has revolutionised how jockeys train and live their lives.

Now I know that after exercise I have a 30-minute window to refuel my body properly. It’s so scientific now it’s scary. I’ll have a protein shake straight after I work out, and then I’ll have ham and eggs as a meal to keep protein intake up. When I’m riding through the day I rely on fruit and nuts to snack on, as I can’t really eat anything too large or heavy.

With regards to becoming champion, I never really set out to become champion jockey. It sounds strange, but because the season is so long you just can’t sustain it. Basically if you have a chance two months out from the end then you go for it; it’s actually a plan that you really only make halfway through the season.

For example, when I rode 46 winners in September – which is unheard of – you honestly couldn’t go at that rate through the whole year. You do, however, start to become very ruthless the closer you get to the prize.

I remember taking a bit of stick for not riding up at Doncaster at the Leger meeting – but as my horse was a non-runner it meant that I was able to ride a four-timer at Lingfield that very same day.